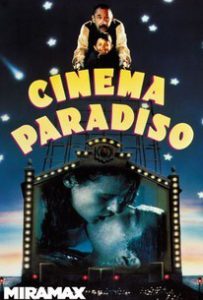 The film starts with the adult Totò, a famous film director, learning of the death of his old friend Alfredo (beautifully played by Philippe Noiret), a projectionist in his Sicilian hometown, and recalling how their friendship, and his nascent love of cinema, shaped his childhood and adolescence. Then there is the teenage Totò, played by hunky Marco Leonardi. But of the three Totòs, it is Salvatore Cascio who lingers longest in the memory: falling asleep in his altar-boy frock in the opening scene; twitching back the cinema curtains for a forbidden glimpse of the big screen; tormenting poor Alfredo until the projectionist has no option but to teach the boy his trade.
A marvellous celebration of the magic of cinema.