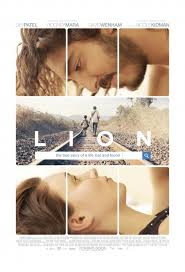 Lion tells the story of Saroo, a five year old boy from a very poor and remote part of India. When travelling with his older brother he gets lost and cannot find his way home. He ends up in an orphanage and then being adopted by an Australian couple.
As a young man, he desperately tries to trace his family.
The first half of the film starring Dev Patel, Rooney Mara, David Wenham and Nicole Kidman, tells the harrowing story of his early life, capturing India particularly well.
The second half follows Saroo’s quest to find his family.