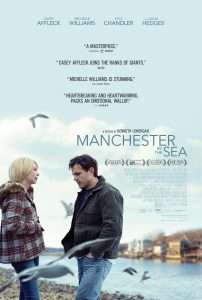 Manchester by the Sea is a 2016 American drama film written and directed by Kenneth Lonergan, and starring Casey Affleck and Michelle Williams. The plot follows a man who looks after his teenage nephew after his brother dies. The film is a moving portrayal of grief, brilliantly acted by Casey Affleck who won an Oscar. The film also won best screenplay Oscar.

Manchester By the Sea, a film that resists tidy resolutions or simplistic life lessons. Instead, it offers up life as it truly is: messy, maddening, full of regrets and words left unsaid. At a time when escapism seems like the default mode, it refuses to look away. For that reason, and so many others, it would be a deserving best picture winner.
Guardian