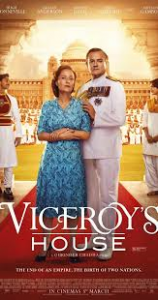 Lord Mountbatten (Hugh Bonneville) arrives at Viceroy’s House in Delhi in 1947 with his strong-willed wife Edwina (Gillian Anderson) and daughter Pamela. As the final Viceroy of India, he is in charge of overseeing the dissolution of the British Raj and the establishment of an independent Indian nation. Mountbatten attempts to mediate a disagreement between the two major Indian political leaders, Jawaharlal Nehru, who wants India to remain intact as one nation after independence, and Muhammad Ali Jinnah, who wishes to establish the separate Muslim state of Pakistan.

Chadha’s heartfelt and very personal drama about the traumas of partition, which strives to dramatise the epochal events of 1947 for the widest possible audience, including those who know nothing of the independence of India or the creation of Pakistan. (Guardian)