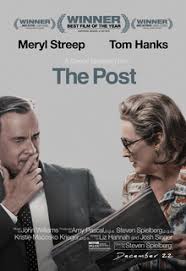 The Post is a political thriller directed and produced by Steven Spielberg. It stars Meryl Streep as Katherine Graham, the first female publisher of a major American newspaper, and Tom Hanks as Tom Bradlee, editor of the Washington Post. Set in 1971, The Post depicts the true story of attempts by journalists at The Washington Post to publish the Pentagon Papers, classified documents regarding the 30-year involvement of the United States government in the Vietnam War.