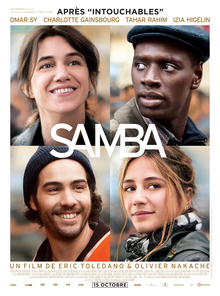 Samba is a 2014 French comedy-drama film co-written and directed by Éric Toledano and Olivier Nakache. It is their second collaboration with actor Omar Sy following The Intouchables (2012). You may also have seen him in Lupin.

Samba Cissé (Sy), a migrant from Senegal to France, works as a dish washer in a hotel. After a bureaucratic slip-up lands him in detention, he is ordered to leave France. With the help of a businesswoman (Charlotte Gainsbourg), he fights to stay in France.

Sy and Gainsbourg do a great job of lending depth and complexity to their characters, while Tahar Rahim is a hoot as Samba’s allegedly Brazilian best friend.