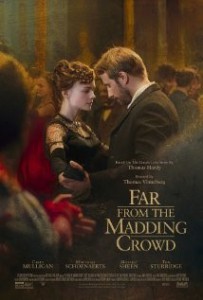 Far from the Madding Crowd is a 2015 British romantic drama film directed by Thomas Vinterberg and starring Carey Mulligan, Matthias Schoenaerts, Michael Sheen, Tom Sturridge, and Juno Temple. It is an adaptation of the 1874 novel of the same name by Thomas Hardy, the fourth time this novel has been filmed. Like many, I was prepared to be disappointed having loved the Julie Christie version but this bears comparison and in some ways does a more realistic and gritty job.