Finally, we have great pleasure in restarting the Sutton on the Forest film club in September. Same procedure as before. The doors will open at 7.30 and the film will start at 8 pm. We will space the chairs so nobody has to sit too close to someone else. And, of course, you are welcome to wear masks if you feel more comfortable.
It has been difficult choosing films now that we have all gone online to get our film fix. However, we feel you will enjoy these two films and hopefully not many of you have already seen them.
We look forward to welcoming you back.
Therese and Jeremy Comfort 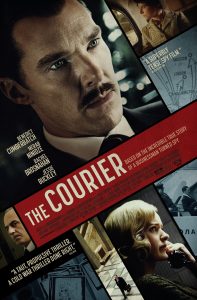 The Courier is a 2020 historical spy film directed by Dominic Cooke. The film stars Benedict Cumberbatch as Greville Wynne, a British businessman who was recruited by the Secret Intelligence Service to deliver messages to secret agent Oleg Penkovsky in the 1960s.

The British actor is a superstar, and millions of people will be pleased to see him in a meaty leading role.  Cumberbatch endures beatings in a foreign jail and gets his head shaved, an indignity that offsets the beauty of his eyes which  resemble coral reef fish. (The Standard) 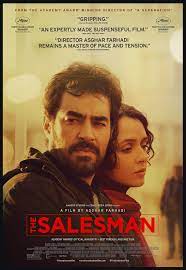 Asghar Farhadi’s Oscar-winning film about two married actors has intriguing parallels with the play they are performing
After their flat becomes damaged, Emad and Rana, a young couple living in Tehran, Iran, must move into another apartment. Once relocated, a sudden eruption of violence linked to the previous tenant of their new home dramatically changes their lives, creating a simmering tension between husband and wife.

The Salesman” is about trust and honor, about violence against women in a patriarchal society ….. (NY Times) 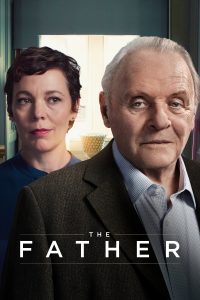 “Let me not be mad, not mad, sweet heaven!” says King Lear. Anthony Hopkins, who played Lear in Richard Eyre’s production for the BBC, now delivers another performance as an ailing patriarch with a favourite daughter and nowhere to stay, in a film directed by Florian Zeller

Hopkins gives a moving, Oscar-winning turn as a man with dementia in a film full of intelligent performances, disorienting time slips and powerful theatrical effects. (The Guardian)