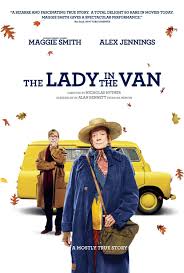 The Lady in the Van is a 2015 British comedy-drama film directed by Nicholas Hytner, written by Alan Bennett, and starring Maggie Smith and Alex Jennings. It tells the true story of Mary Shepherd, an elderly woman who lived in a dilapidated van on Bennett’s driveway in London for 15 years. Smith previously portrayed Shepherd twice: in the original 1999 theatrical production, which earned her a Best Actress nomination at the 2000 Olivier Awards; and in the 2009 BBC Radio 4 adaptation. An incredibly good performance by Maggie Smith.