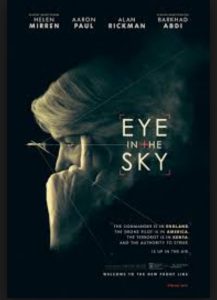 Eye in the Sky is a 2015 British thriller film starring Helen Mirren, Aaron Paul, Alan Rickman, and Barkhad Abdi. The film, directed by Gavin Hood and based on a screenplay by Guy Hibbert, is about military personnel facing legal, ethical, and political dilemmas presented by modern drone warfare against those using terrorist tactics, and civilians who are endangered by it.