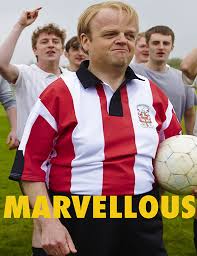 Marvellous is a BAFTA-winning British television film that was first broadcast on BBC Two on 25 September 2014. The ninety-minute film, directed by Julian Farino and written by Peter Bowker, is about the life of Neil Baldwin, from Westlands in Newcastle-under-Lyme, Staffordshire. Baldwin, who is honorary graduate of Keele University, was appointed as Stoke Citry Football Club’s kit-man by the manager Lou Macari in to 1990s.