The doors will open at 7.30 and the film will start at 8 pm. We will space the chairs so nobody has to sit too close to someone else. And, of course, you are welcome to wear masks if you feel more comfortable. 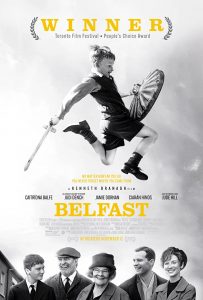 Belfast is a 2021 British coming of age comedy-drama film written and directed by Kenneth Branagh. The film stars Caitríona Balfe, Judi Dench, Jamie Dornan, Ciarán Hinds, Colin Morgan, and newcomer Jude Hill. The film, which Branagh has described as his “most personal film”, centres on a young boy’s childhood amidst the tumult in Belfast, Northern Ireland, at the end of the 1960s.

Branagh has made a masterpiece. Belfast is a deeply soulful portrait of a family in peril, culled from Branagh’s childhood. (The Times)

Spielberg’s triumphantly hyperreal remake. Stunning recreations of the original film’s New York retain the songs and the dancing in a re-telling that will leave you gasping (Guardian)

There’s so much beauty in this “West Side Story.” It merges things that have truly shaped pop culture from the graceful precision of Spielberg—who has always had a musical director’s eye in terms of how he choreographs his scenes—to the masterful songwriting of Stephen Sondheim and Leonard Bernstein to the brilliant writing of Tony Kushner to the immigrant experience in this country. It grabs you from the very beginning and takes you there. Somehow, someday, somewhere. (Independent)